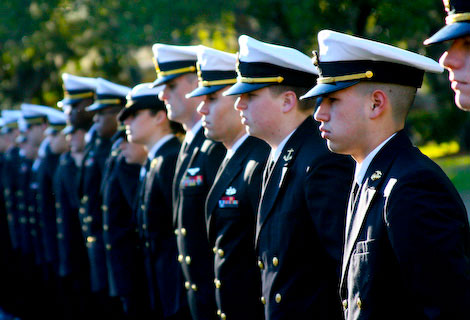 ​I would like to take this opportunity to welcome you to the Jacksonville University Naval Reserve Officer Training Corps (NROTC) Unit. Your time here will prove to be challenging, but you will look back at your time at the NROTC Unit as a rewarding one. We are here to prepare young men and women mentally, morally and physically to serve as commissioned officers in the United States Navy and United States Marine Corps.

On 23 September 1971, the first NROTC Unit in the State of Florida was formally dedicated during ceremonies at Jacksonville University. The Secretary of the Navy had approved its establishment 05 April 1971. The first class, consisting of 43 Midshipmen, began their training on 01 September. The guest of honor at the dedication ceremony was the Honorable James E. Johnson, Assistant Secretary of the Navy for Manpower and Reserve Affairs. Speaking to the assembled Midshipmen and guests, Secretary Johnson called attention to the city of Jacksonville as a natural place for Florida's first NROTC Unit because of the community's long tradition of support for the U.S. Navy. He also reminded the 43 new Midshipmen to take a positive approach to their future and to be proud of their roles in the Navy and Marine Corps. "You must recognize that this is your country," he said. "Be proud to be an American and be proud to be a flag waver." Forty-two years later, Jacksonville University and the NROTC Unit continue to work together to instill and support the same strong bond of pride and community in all Midshipmen.

Jacksonville University is one of four Florida universities among sixty-three colleges and universities in the United States which sponsor NROTC training. The NROTC Unit has commissioned over 1,680 Navy Ensigns and Marine Corps Second Lieutenants for service in the wide variety of warfare specialties including Surface Warfare, Submarine Warfare, Naval Aviation, Nuclear Power and across the spectrum of Marine Corps Military Occupational Specialties (MOS's).

You are embarking on an ambitious and critical mission here at the Jacksonville University NROTC Unit. Whether you are here to provide support or to earn a commission, your years here will be the most demanding yet satisfying of your career. Congratulations on your decision to join the Jacksonville University NROTC; serving our nation is a honor and a rewarding challenge.