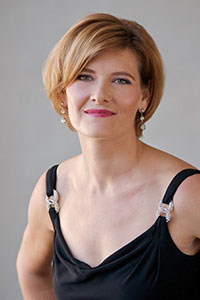 Professor Kimberly Beasley is a leader in the Linda Berry Stein College of Fine Arts as Associate Professor of Voice, Department Chair of Music, Coordinator of the Music Therapy Planning Committee, director (and performer) of many musicals, and soon, published co-author of the book, Dramatism and Musical Theater: Experiments in Rhetorical Performance (Peter Lang Publishing, 2020).

Prof. Beasley has a passion for musical theater, both on the stage and on paper: her archival research of theater pieces allows her to uniquely deepen shows and bring her characters more to life. “I always have an archival element to my direction - I research the show and bring that back to the student experience in the show,” says Prof. Beasley, who has been directing at Jacksonville University since 2009. Her book is co-written with her husband, Dr. James Beasley, rhetorician and Professor of English at the University of North Florida (UNF). The work of philosopher Kenneth Burke has informed much of Prof. Beasley’s exploration of dramatism and directing, and is a topic area on which Dr. J. Beasley has written extensively. In A Grammar of Motives (1945), Burke outlined his conception of dramatism, which is a method to identify the rhetorical nature of any text, allowing for different parts of a play to be emphasized more than others according to the unique interpretation of the director. Thus, the two decided to combine their expertise for this book. “My research directly informs my teaching as far as directing shows at Jacksonville University, something required of me and my colleagues in voice. I choose to combine archival research into the production elements as a way to teach students both how to research and how to perform,” says Prof. Beasley.

The first show where the implementation of dramatism played a major role in Prof. Beasley's directing was Little Women, the Musical. Although very familiar with the book, she had not directed the musical before. “I love this story, as many of us do, and wanted the students to get into the details as much as possible,” said Prof. Beasley. She began researching the Louisa May Alcott letters in the archives at Harvard University and brought some of the archives back to her students. With piqued student interest, both Prof. Beasley and her students dove into character analysis work, using Burke's concept of dramatism as a bridge between the typical singer/actor approach and the literary and rhetorical approach. For this show she decided on a theme using pentad structure, focusing every scene on the act and building acting strategies around that. Subsequently, every show Prof. Beasley has directed at Jacksonville University has incorporated the pentad structure into every scene and character, teaching this method to her students along the way. Likewise, Prof. Beasley and Dr. J. Beasley’s book takes each of five shows, Little Women, Into the Woods, Aida, the Musical, Children of Eden, and Street Scene and describes this literary, dramatistic intersectionality. The book's purpose is to inform both directors and student actors of this approach to character and scene development.