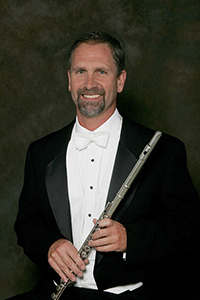 Les Roettges is the Principal Flutist of both the Jacksonville Symphony Orchestra during the regular season, and the Eastern Philharmonic Orchestra as part of the Eastern Music Festival during the summer season. He also serves as the Chamber Music Program Coordinator for the Eastern Music festival and is featured regularly on their chamber music and orchestra series concerts. In 2012, Les began the position of second flute in the newly formed “All-Star Orchestra” under the direction of internationally acclaimed conductor Gerard Schwarz. This is a new orchestra project comprised of select musicians from orchestras throughout the United States. The All Star Orchestra records and films shows for broadcast on PBS stations nationwide. The first season began airing in the fall of 2013 and has won three EMMY awards. The second season began airing in the fall of 2015. Mr. Roettges has been the Principal Flutist for the Philharmonic Orchestra of Mexico City, Guest Principal Flutist with The Florida Orchestra, and flutist with Solisti New York. He is a regular participant in the chamber music societies and festivals of San Marco and Saint Augustine, and is the Adjunct Professor of Flute at the Jacksonville University. He holds a Bachelor of Music from the New England Conservatory, a Master of Music from the Juilliard School of Music, and professional studies in Paris. His teachers include Maurice Sharp, Paula Robison, Julius Baker, Alain Marion, and Robert Stallman.