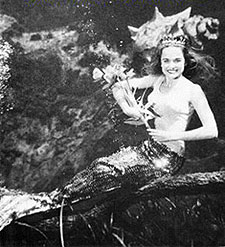 Early sailors reported seeing mermaids when in fact they were probably seeing manatees or their relatives. In ancient mythology, the word "siren" meant sea nymphs who were believed to lure sailors toward treacherous rocks and resultant shipwrecks with their mesmerizing "siren songs." "Sirenia," which names tho order to whick manatees and dugongs belong, originates in this myth.

With a lot of imagination that would only increase after long months at sea, manatees might resemble a human form without legs. The manatee probably helped perpetuate the myth of the existence of this and other creatures such as the St. John's River monster in Jacksonville, FL. It is believed that this snake-like creature may actually be a herd of male manatees after a female manatee, forming a line of humps in the water.