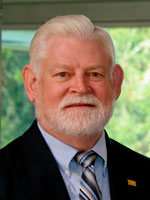 Dr. Bill Crosby was named Interim Dean at Jacksonville University’s Davis College of Business for the third time effective May 1, 2019. Bill earned a Bachelor of Science in Accounting from Valdosta State College where he was named the Outstanding Accounting Student his senior year. He earned a Master of Accountancy and a Doctorate with a concentration in Accounting from the University of Georgia where he was awarded a Fellowship by the American Accounting Association. Bill is a certified public accountant in the state of Florida and has public accounting experience with Price Waterhouse & Co., and with his former accounting and tax practice in Jacksonville, Florida. He has 40 years’ teaching experience at the University of Georgia, University of North Florida, and Jacksonville University.

Bill has published in a number of peer reviewed journals, has led more than fifty seminars and continuing professional education sessions for certified public accountants, and has taught numerous CPA examination preparation courses. He is a member of various professional organizations including the American Institute of Certified Public Accountants, the Florida Institute of Certified Public Accountants, and the American Accounting Association.

Bill has been a part of Jacksonville University since 1992, serving as an adjunct instructor, Professor, Associate Dean and Interim Dean in JU Davis College of Business, Dean of the College of Interdisciplinary and Professional Studies, Vice President for Finance and Administration, Acting Chief Academic Officer, Director of the Accelerated Degree Program, Acting Associate Provost, the Robert T. Shircliff Professor of Business Ethics, and the NCAA Faculty Athletics Representative. He was named Professor of the Year in 2012-13.